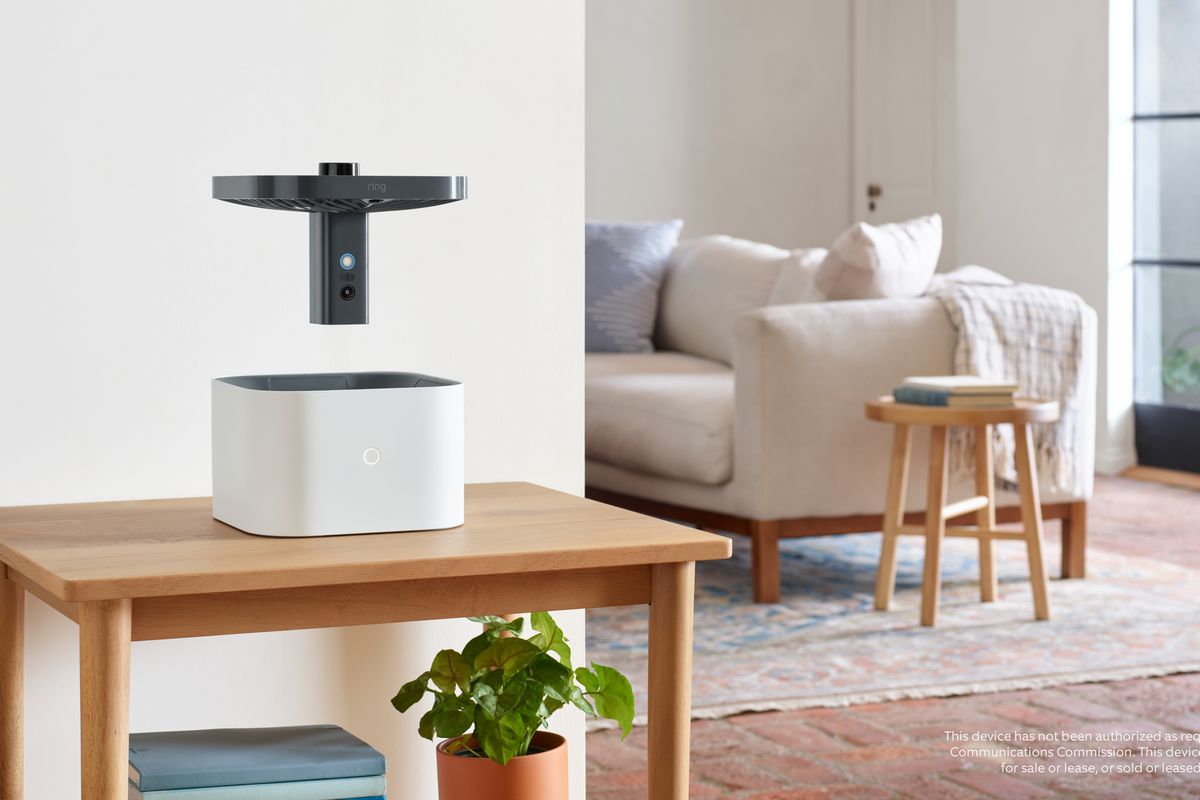 First announced at last year’s Amazon hardware event, the Ring Always Home Cam is now ready for take-off. Starting today, September 28th, you can request an invitation to be a crash-test dummy for Ring’s newest innovation. The Always Home Cam is a Ring camera attached to a drone that can fly predetermined paths in your home when triggered via a Ring Alarm sensor or from the Ring app. The camera costs $249.99; if you live in the US, you can apply for an invitation to buy it

today, and the devices will ship later this year.

Designed to solve the problem of wanting to be able to see inside your home when you’re not there but not wanting to have dozens of cameras watching you when you are, the Always Home Cam only records when it’s in flight. When not in use, it sits in its charging dock that blocks its lens. It can fly to specific viewpoints on demand — such as the front door or kitchen stove — and can also tie into a Ring Alarm home security system and buzz over to any action — such as a door or window opening when the alarm is armed.

In the year since it announced the product, Ring has been working on refining the ambitious device and essentially making sure it won’t go on a rampage through your home. “It’s not an overstatement to say we’ve made a thousand refinements to it,” Ring founder Jamie Siminoff said in an interview ahead of the announcement. “We learned how to fly.” While they had working prototypes when they announced in 2020, it’s only now ready for regular people’s homes, says Siminoff. But not everyone’s.

Ring is rolling out the invite-only program as a sort of post-beta test flight. “I have it in my home, and it does work,” said Siminoff. “But today’s homes are so unique, so we really need to get it into more customers’ homes to make sure everything we are doing is right.” After all, it is an autonomous flying machine in your home. “With any other product, we would have probably just been shipping. With this one, we are going to take our time, make sure it’s right before we go to full, general availability.”

The invite-only program, which is a recent trend with Amazon products, is a way to attract the right type of customer to the product at this stage, says Siminoff. “It’s a customer that’s willing to and wants to work with us,” he said. “They understand what they’re getting into. We use this as a tool to deliver the best products to customers and be transparent with them.” So, does this means if it crashes into your big screen TV, you’re just plumb out of luck?

In terms of day-to-day use and features, much of what was announced last year is the same. The Always Home Cam is an indoor-only camera attached to a drone with enclosed propellers. It streams and records to the Ring app, is fully autonomous and can be commanded to fly on-demand to pre-set locations through the app or programmed to take off when Ring Alarm detects a disturbance. Ring says the resolution of the camera has increased to 1400 x 1400 HD, which is a bump up from the 1080p resolution it was when it was first announced.

The camera only records in-flight, and the drone makes an audible noise, so it’s clear when footage is recording. It has obstacle avoidance technology, but its shrouded propellors should prevent any serious damage if there is a collision (“But you should keep it away from your Van Gogh,” joked Siminoff).

The Always Home Cam is designed for use on a single floor, as it can’t navigate stairs. But Siminoff says multi-floor support is something the company is exploring. It should also only fly when there is no one home. While the drone has been tested with ceiling and tabletop fans, Siminoff said it might have difficulties if a fan is blowing full speed. “But if it feels like it’s not doing the right thing, it’ll just land in a safe area and sit there,” he said.

The battery life is short, with flight time limited to around five minutes. “The idea is it’s very like tactical; you don’t need to go see that a door’s ajar for two hours,” said Siminoff. “It’s meant to go out for a few minutes, see what you need to see, and then fly back.”

A flying camera in your home does feel like a sci-fi fantasy / horror story come true. But from a practical and privacy standpoint, the concept is a solid one. You only need one camera to see an entire floor of your home, and there’s no danger of it accidentally recording without you knowing about it. Also, it’s way cool. “There’s something about watching this fly through your house on your phone; it feels like something out of Hollywood, but it’s your house,” said Siminoff. “For me, it really was a jaw-dropping experience.”