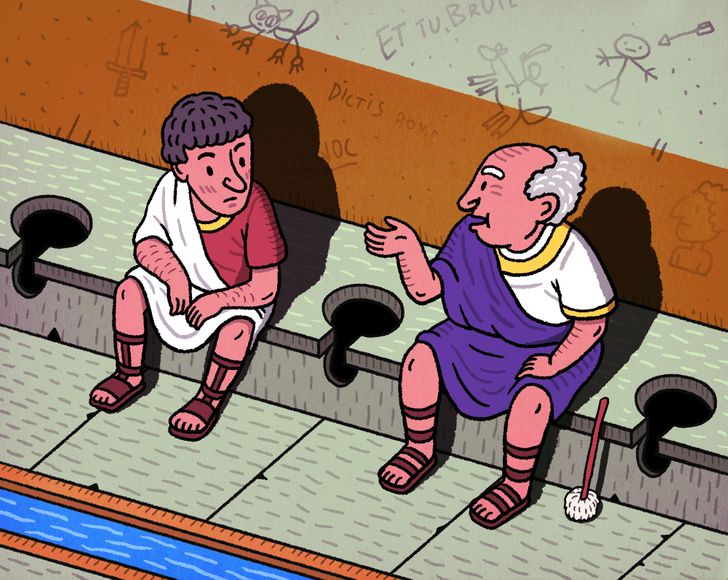 Today it seems normal to go to the bathroom and use it in private. However, before the 19th century, this was unthinkable. What we now know as the bathroom appeared in Europe at the end of the 1800s when running water became widespread in the home. Previously, there were only public bathrooms, where it was common to play and even engage in conversation while performing intimate needs. We can’t imagine any of that in our time.

Bright Side researched some facts about ancient bathrooms and how they evolved from large gathering places to smaller, more personal venues.

From the Roman Empire to the Middle Ages, men and women washed in communal baths. Built and run by the state, they were a common daily destination for bathing and socializing. These multi-purpose buildings concentrated cold, warm, and hot pools, but also stores, gymnasiums, and libraries. Some could accommodate up to 1,600 people at a time.

2. They were not private at all

Located in urban centers, latrines were facilities that were usually designed next to the gardens in a city and they housed multiple people at the same time. What is now an extremely private moment, was not so private in the 1st century B.C., as the Romans saw it as a social activity.

3. They were used to eat and to meet people

Some people like to go to the bathroom to chat or to fix a wardrobe detail. But the Romans ate, played, and brushed their teeth in these bathrooms. For them, it was a perfectly normal habit and they didn’t mind doing their physical duties while hanging out with others.

In Roman times, baths were a great place to meet new people and socialize. According to one study, which investigated objects lost in the drains of these sites, bathers ate desserts, mussels, and shellfish there. They also enjoyed small cuts of beef, lamb, goat, pork, poultry, and wild deer.

They played with dice and coins and worked with textiles while in there. The latter, explains study researcher Alissa Whitmore, probably took place in the dressing rooms or common areas that had seating.

4. They had a shared cleaning sponge

Toilet paper did not yet exist in Ancient Rome, so they used a sea sponge tied to a wooden stick to clean themselves. Perhaps most surprisingly, Roman public latrines had no private cubicles, so the sponge, after being used, was placed back in a bucket filled with salt water or vinegar. It was a communal cleaning material.

5. They were for the whole family

From the Roman Empire to the Middle Ages, baths were mixed. In the latter period, it was customary to take them as a family. The preparation for bathing started at home. It was common to see the father of the family, or the child, walking down the street in their underwear.

During the Middle Ages, if you wanted to go to the bathroom, all you had to do was find a stairway, bridge, or other public places. During this period, the street served to satisfy one’s natural needs.

Historian Carole Rawcliffe explains that in the late Middle Ages, people became more interested in health and hygiene. As a result, authorities funded public latrines to keep their cities clean. Large facilities arose where people, mostly men, could relieve themselves through holes inserted in bridges that deposited human waste in the rivers that flowed under them.

7. The latrines smelled very bad, especially in the summer

During this same period, the design of the bathrooms was based on social class. Castles were equipped with special spaces that had holes in the floor. They were similar to closets, inserted into the thickness of the outer walls, and dumped human waste into pits on the first floors.

The latrines sent the excrement directly into the cellars or the castle moat. The smell produced by this cesspit was unbearable, especially in summer, because it rose through the pipes and returned through the mouth of the latrine.

8. They had to be emptied manually

The use of the toilet was gradually adopted by the society of the 18th century, so that even in the middle of this century the use of latrines was common, the contents of which were emptied by “nightmen.” They were in charge of collecting waste when the streets were empty.

The service of the nightmen was provided every 24 hours in the best districts. Although it was less frequent in the poorer areas.

9. Waste was dumped in the streets

In ancient times, access to waste management was a class privilege. Thus, in the absence of an indoor toilet, people in Edinburgh used to shout “Gardyloo!” to warn passersby of the human waste they were about to throw from their window.

This term came from the French expression, “Prenez garde a l’eau!” — meaning literally “beware of the water.” This practice continued until the introduction of sewage systems in the 19th century.

10. They were a focus of infections

After the first sewage systems were installed in European cities, deaths from cholera and typhoid fever decreased exponentially. It turns out that the first of these diseases were spread through contaminated water. Today, this may seem obvious, but it took researchers years to figure this out.

The first to do so was Dr. John Snow, who, through the use of maps, identified the source of the infection in London: a septic tank under one of the nearby houses was leaking into the well that supplied the water pump. Snow’s work was not only a milestone in sanitary mapping and the first epidemiological work in history but also the starting point for the modern sanitation systems later adopted by Western cities.

Have you ever had to look for or go to a bathroom other than the one in your home? What was your experience like? Tell us what you like most about having a bathroom in your home? 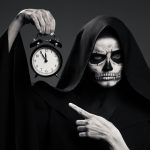 So, What happens after death? 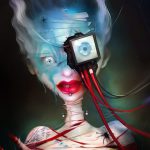 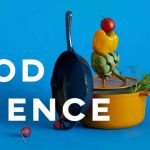 Food and Pleasure: The Science Of Yumm 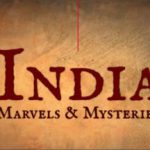 20 Feb 2020
8 Jul 2021
Riveting
10 Facts About Ancient Restrooms That Will Make Us Thankful to Have a Bathroom Inside Our Home, Ancient Restrooms, Bathroom, communal, eat and to meet, emptied manuallydumped, infections, not private, outdoors, private, shared, sponge, summer

9 Amazing Trends That Originated in China