At its annual hardware event today, Microsoft unveiled a new family of Surface devices ahead of Windows 11’s launch on October 5th. Refreshes of the Surface Pro and Surface Go aren’t surprising, and the company did show off the latest in both of those series. But the Surface Laptop Studio is the most intriguing. It’s meant to replace the Surface Book, which was a detachable 2-in-1 laptop. The Laptop Studio, meanwhile, is more like Microsoft’s Surface Studio all-in-one desktop, in that it features a pull-forward screen that can lay flat on top of a table or be propped up at a slant. It also has a 120Hz display, as does the new Surface Pro 8, which got a sleek redesign.

I was able to check out the Laptop Studio, Surface Pro X and a slew of new Surface devices at a recent (COVID-safe) demo event in New York and I have to say, these Windows 11 PCs are looking very promising.

Let’s start with the Laptop Studio, which a Microsoft rep told me at the event will replace the Surface Book line. Like I mentioned, its new easel-style design is similar not only to its namesake Surface Studio, but also to notebooks from Acer and HP. I was very impressed with how thin the Laptop Studio’s 14.4-inch screen is, and it popped out of its frame without much force. The hinge connecting the display to the keyboard is sturdy, and kept the screen up at a variety of angles in laptop mode. 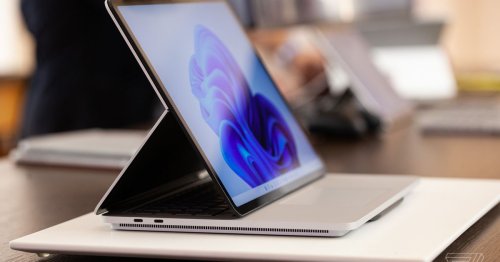 When I flipped the screen to face outwards, though, I had trouble trying to push the lid away from me to get it to stand at a gentler angle as the panel popped out of the frame. But in every other configuration, such as a conventional laptop mode or laid down flat like a tablet (which Microsoft calls Studio mode), the Surface Laptop Studio behaved as expected.

When the screen is pulled forward and propped up in front of the keyboard in what the company calls Stage mode, it’s great for digital artists. It’s easier to draw on, and you can use the new Slim Pen 2 to create your masterpieces. The new stylus offers haptic feedback with an onboard motor and also mimics the resistance you’d get with pen on paper. I did feel a sort of drag across the Laptop Studio’s screen when I started doodling on it with the Slim Pen 2. It felt odd at first, as I’m accustomed to other styli like Samsung’s S Pen. But I got used to it quite quickly, and kind of liked feeling the mild vibrations that served as an indicator that something had been enabled.

The Laptop Studio has a magnetic strip under the keyboard that lets the Slim Pen 2 attach easily and remain flush with the rest of the machine. The magnets were strong enough that I only had to roughly place the stylus along the edge and it flipped into place. I don’t feel like I’d need to worry about losing the accessory with this setup, which is nice.

Microsoft also offers a 120Hz screen on the Laptop Studio, and a company representative told me at the demo that the touch sampling rate is 100Hz. This should make for a smooth drawing experience, but also make scrolling and animations look super buttery. There’s no adaptive refresh rate available in the system — you’ll just get the option to choose between 120Hz or 60Hz in settings.

For all the detailed specs on the Laptop Studio, like its new Full HD webcam, its screen resolution, dimensions, processor and memory configuration options, I encourage you to check out our news post. For this hands-on article, I’d like to focus on my initial impressions of the devices I got to try out. On that note, the last thing I’ll say about my experience with the Laptop Studio is that its keyboard and trackpad were spacious, and though its buttons were cushy and responsive, I prefer the keys on the Surface Laptop 4. For things like battery life, performance and other real-world observations, though, we’ll need to wait till we can test out a review unit.

Another device that got a visual overhaul this year is the Surface Pro 8. It’s not the only new Surface Pro unveiled today — there’s also the Surface Pro 7 Plus, which received a typical minor processor upgrade and looks very similar to older Microsoft tablets. The Pro 8, meanwhile, looks a lot like the ARM-based Pro X. But it uses 11th-gen Intel Core i5 or i7 chips and is therefore noticeably heavier. It also has a different ventilation design around its sides compared to the X, which was sealed.

Still, the Pro 8 is impressively thin, with a 0.37-inch profile, and its built-in kickstand is even sharper. Its 13-inch screen is surrounded by an attractively thin bezel as opposed to the approximately inch-wide border around the Pro 7 Plus. The Pro 8 also features the same 120Hz refresh rate as the Laptop Studio, running at a 2,880 x 1,920 resolution.

Out of the box, though, the Pro 8 runs at 60Hz, and you can go into settings to bump this up to the higher rate. Meanwhile, the Laptop Studio refreshes at 120Hz by default. This difference is because the Pro 8 is designed to be a more portable device, and Microsoft expects people to want more battery life on the go. If your priority is smooth scrolling and inking (Slim Pen 2 is also supported here), then by all means go faster. But if you’re trying to squeeze every last minute out of the Pro 8, you might prefer to stick to the lower rate.

When you’re out of juice, you can charge the Pro 8 back up with Microsoft’s own connector or through one of the pair of USB-C ports. These support USB 4 and Thunderbolt 4, and can stream out up to two 4K displays at once. We weren’t able to test this during the limited time at our preview, and I can only really tell you that in general the Surface Pro 8 felt very much like a heavier Pro X. They use the same Signature Type Cover with the same comfortable keys and responsive trackpad, as well as onboard slot that holds and charges the Slim Pen 2. 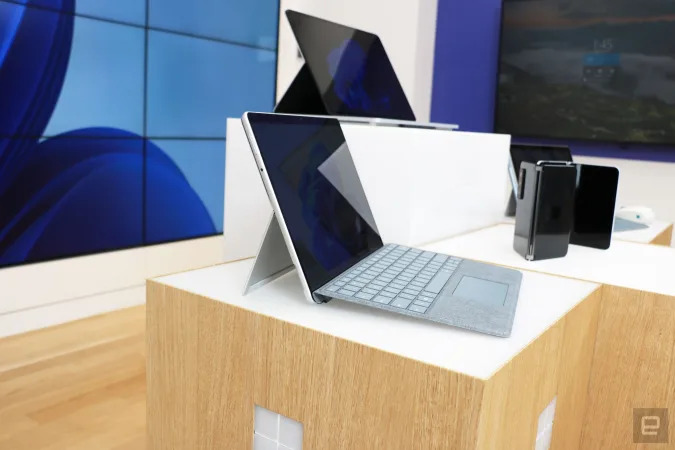 Of all the other Surfaces Microsoft announced today — the Go 3, the new Pro X, the Pro 7 Plus and the Duo 2, only the last one is different in a significant way. The rest of the systems basically got incremental updates while maintaining a similar look to their predecessors.

I did want to call out the new Surface Adaptive Kit, though. It’s a set of labels and stickers that are designed to make Surfaces easier for people with different needs to use. There are translucent keycap labels to make buttons identifiable by touch, bump labels that add visual and tactile cues to keys or ports, as well as colorful indicators with matching cable wraps to make it more obvious which wires go into which sockets.

The colors I saw at the demo area were neon peach hued and I’m not sure if they’ll be appreciated by people with certain visual impairments (a pattern might be better for those who can’t distinguish between colors). But at least the keycap labels I saw came in different shapes and overall I appreciate the effort here. 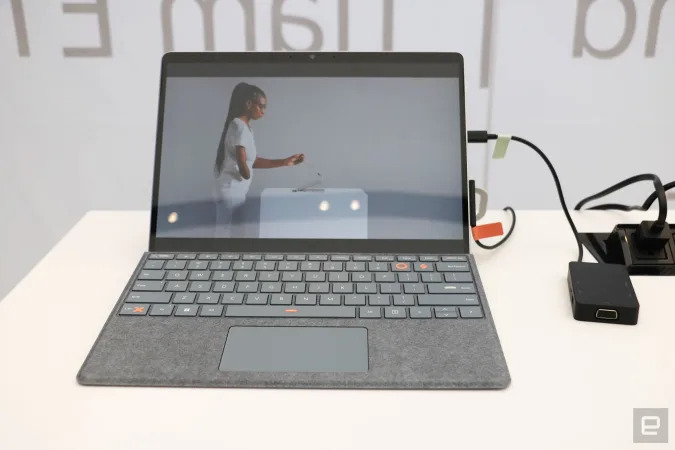 Microsoft led the way for accessibility tech in gaming with the Xbox Adaptive Controller years ago and though the Surface Adaptive Kit seems like a small product, it shows that the company is thinking in meaningful ways how to cater to people with different needs.

Though most of the new Surfaces that were unveiled today feel like incremental updates, the Laptop Studio, Duo 2 and Pro 8 at least bring a low-key level of excitement. Plus, these machines (Duo 2 aside) will all run Windows 11, which is already bringing new life to a stagnating PC industry. As always, we’ll need to test all these devices out for ourselves to see if they’re worth spending your money on, but you can already pre-order all of them today.